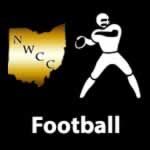 The 2020 football schedule for the Northwest Central Conference (NWCC) has been announced.

You will see that both Crestline and Ridgedale have joined for football only this year.  They were both scheduled to join in 2021. There are two divisions of five teams and we will award championship honors to the winners of each division. Also, schools will have the option to schedule games beyond the six game schedule.

NWCCSports.com | The Official Site of the Northwest Central Conference for NWCC news, NWCC scores and more.
Go to Top